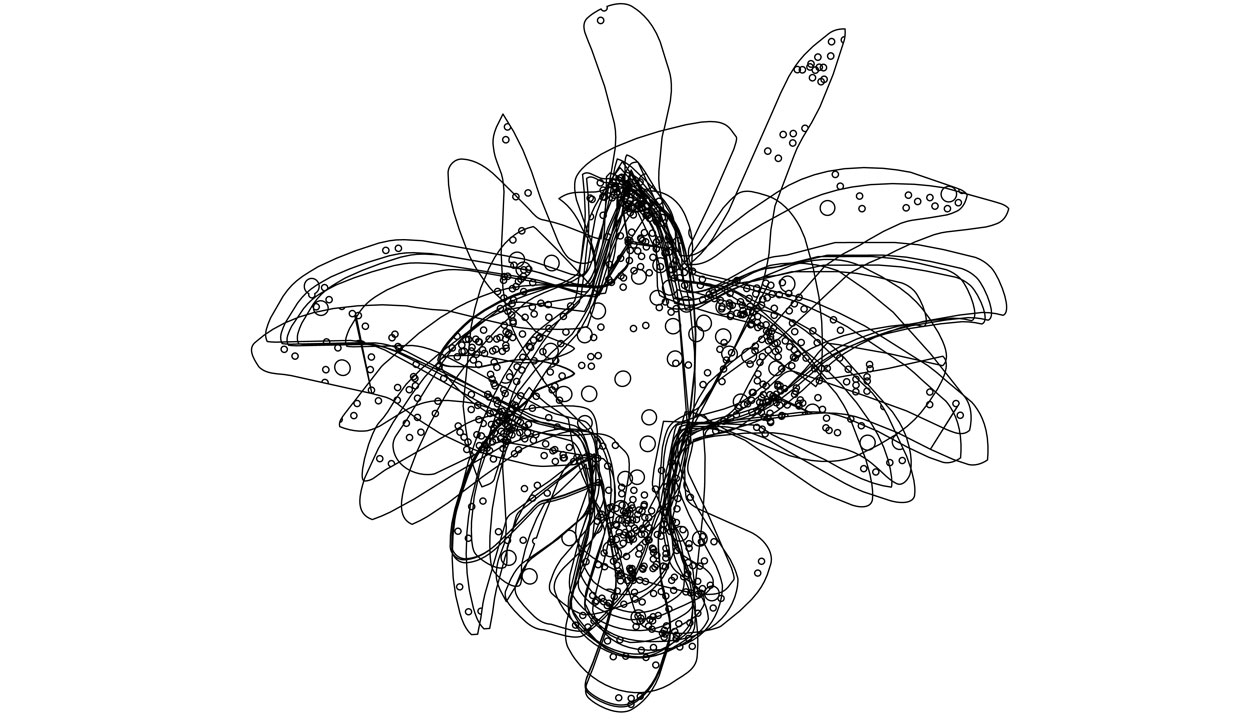 One fascinating thing about building a large scale work in CAD space is the incidental creation of all kinds of interesting visual artifacts. A three dimensional object must be both defined mathematically in a way that can be processed by a machine as well as represented on a screen in a way that is both understood and manipulated by a human eye/brain. The designers of CAD software have created all kinds of methods to help in this process. These include varying line-weight to help the eye understand hierarchy (something also considered critical in better art-schools) as well as the creation of all kinds of reference lines/planes and other visual aids to help make sense of the object being created. If one is building objects that are more than simple shapes and other than right angles, things get very complicated quickly.

I am currently working on a large wind activated commission that among other things will have “sails” made up of hundreds of stainless steel bird-like forms. These bird forms will be welded together to mimic a flock of birds. But in order to keep the sails light and strong, we need to force these forms to create a complex curve as this is the most effective way to utilize the strength of metal in thin sheet form. You might think that car bodies are all curve because it looks cool, but the real reason is that if you stamp a sheet of metal into a complex curve, it becomes remarkably stronger and rigid for the weight and amount of material.

So as part of this commission, I have been working with a brilliant guy named Dallas to find a way to piece together a form of many individual pieces in a way that forms a complex curve (think about the surface of a sphere). As metal doesn’t want to behave this way, a method has to be found to force it into position. The method we have been working on is to break the curve into triangles (like a geodesic dome) and put small holes in the bird shapes that correspond with the corners of the triangle. By aligning the pin holes, it should be possible to build a large, complex curve that is very light and strong.

For some reason, it makes sense to keep a file of all of these forms stacked on top of one another as a layered line drawing. Here is our first test run of the bird forms (about a third of one of the sails) with all of their reference holes as a stacked line drawing, this is the file we are using to laser cut the forms and will be building a full scale test soon to see if it works as planned. You can see the alignment holes as well as the larger holes that will be used to attach the pieces to the support frame. Each bird form is unique and, like a giant jigsaw puzzle, must be in its proper place and orientation for the system to work.